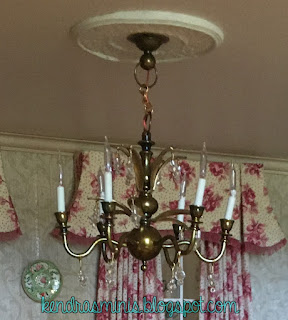 Last blog I told how I embellished an old chandelier with jewelry findings and crystals.  This time I am sharing some hints and lessons learned I experienced while doing this project.  Hopefully my readers can benefit from my problems and mistakes!  We learn from each other, right?  I know I appreciate all the blogs I have read which have helped me and saved me a lot of time!

But before I get into the hints I wanted to say that I appreciate my followers and hope you are able to continue following now that Blogger (or Google, should I say?) has taken away the Feedburner email subscription function.  I haven't found a replacement yet.  I hope my readers can continue to find me.  Please let me know if you have suggestions or problems (I don't know yet how to solve this but first I just need to know if it really is a problem...)

Hints for working with a vintage or used chandelier:

So how do you hang it??
I have hung a few chandeliers now (6 to be exact; 7 if you count the one I had to replace).  I learn something every time.  But here are my tips for mounting through the floor above where the chandelier will go:

I didn't go into the details on running tape wire or making the grommet connections or soldering because there are so many kits and books that describe this.  Recently I have also started putting micro plugs on the chandelier then soldering the female end of the plug to the tape run (but this is for another blog… ).  I don't consider myself an expert in hanging chandeliers but here are some links to two people who have much more experience.   Both Carl and Tina are very familiar with the Cir-Kit products and have several videos on using their chandelier adapters which can be used on the ceiling (as opposed to through the floor above, as I have done). I use Carl's products for my lighting - power supplies, etc.  He has an AWESOME book that is so helpful and includes information about LEDs and converting your dollhouse from the old 12 volt transformer to DC power (which I have now done - maybe a future blog post??).  I love Tina's videos because, even though she has been building dollhouses for 25 years, she gives a very honest review of products from the perspective of a "newbie" (or "noob" as my grandson would say) including the problems she has encountered with those products.  You learn more from these people than from the Cir-Kit website because they actually show you the components in the bag and what each little piece is used for.

My favorite book on miniature lighting from CR2S

In the near future I will have to hang some fixtures on the ceiling of the top floor.  I will let you know how that goes!!

Thanks to my readers for your interest.  Remember to let me know if you are having problems with the loss of Feedburner.   Thinking of what to do next...any suggestions?