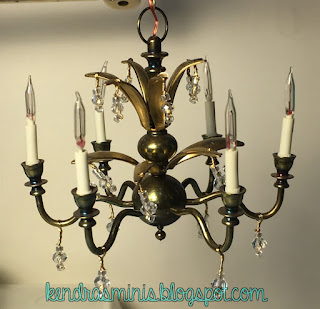 I feel it is very hard to find miniature light fixtures that aren’t dated-looking or that look like they were from a big-box hobby store (common).  I don’t like most of those battery fixtures – the bases are very thick and the bulbs very squared off, they don’t look like candle flames when on sconces and chandeliers.  They have their place – like maybe in a room box, where there are only a few fixtures but who would want to turn on many of these every time you display your dollhouse?  This is why I have so many blog posts for making sconces, lamps, etc.

I like traditional fixtures but want a modern spin on it.  I found one that I really like at Lighting Bug.  I purchased it but it was kind of expensive (absolutely worth it when you consider the artistry!).  But when I decided I needed another one, I wanted to try to replicate it using a less expensive chandelier to start with. Here is the one I purchased (left) and the one I embellished (right).

Here is how I did it. Supplies and tools are in bold and also listed with cost at the end.

Hope this inspires you to embellish a chandelier.  Next time - some hints on working with vintage or used chandelier and hints on hanging a chandelier.