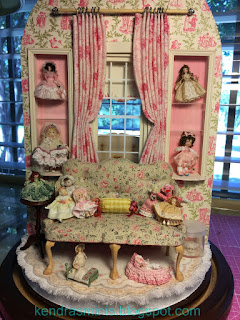 This is a project hosted by SAM – Society of American Miniaturists (minisam.org).  I have been a member for 20-something years (on and off).  I have blogged about other projects.  We get together for an annual themed birthday which is celebrated by a day-long workshop (free to members who pay $25 yearly membership!!).  It is always an awesome day.

The project made last February 2017 was called “A Dome of My Own”.  It was created by some of our SAM members in the San Antonio, Texas area.  Everyone received cut out wall and round base to fit inside an 8 x 12 glass dome (like you find at Hobby Lobby).  Members had to purchase their own domes but the workshop included the walls, floor, window, and optional window box and awning (in case your wall separated an indoor and outdoor space).  I should mention also we received lots of wonderful tote bag favors!

I wanted my dome to have both sides be interior spaces– don’t ask me why I would have a window between two interior rooms – that’s just how I want it!

Since there was very little space on each side for any furnishings I thought I would “expand” one side of the wall by cutting into the ½ inch foam core wall to make little inset shelf units.  Here is a tutorial on how I did it.


Hope to be posting more of this project in the coming weeks!
Posted by Mininut at 12:00 AM 5 comments: