I have done a couple of blogs on curtains.  I will give a reader’s digest version of the two window treatments I used in this project.  This project is a dome with a wall in the middle of the base.  Since I was doing an interior scene on both sides of the window, my window treatments had to coordinate – I didn’t want to see one room’s curtain from the other side of the window.  So I decided I had to put the shade on both sides.

Shaped Shade
This fabric covered shade (Side 2 of dome) is two layers - two pieces of index card, each covered with a different fabric.  I covered the striped one first, clipping the curves and folding the clipped tabs to the back (sorry, I didn't photograph that step).  I used Crafter’s Pick Ultimate Glue. 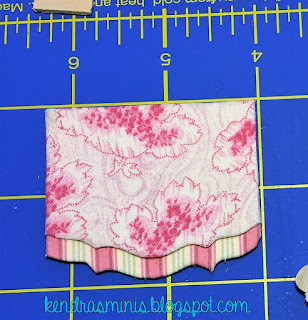 Then I cut a second index card about ¼ inch shorter.  I covered the shaped edge first (bottom edge).  Then I placed it on top of the striped one (already finished) and wrapped just the side tabs around to the back attaching both layers together.  This was glued into the window frame.

On Side 1 (long drapes side) I put a simpler version of the shade with only 1 layer of fabric.  Since both shades are the same size and shape, each one covers up the back side of the other.

Long Drapes
For the draperies, I started with a piece of fabric about 11 by 6 inches. 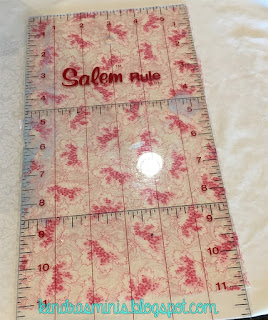 I used the largest Pretti-Pleater (one inch scale) to pleat the fabric.  You can see some fusible interfacing in the photo but I didn’t use it until after I pinned them. 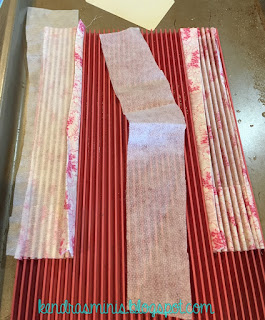 Next I sewed jump rings between each pleat.  You can see them in the next photo.  I think they were about ¼ inch (8mm) in diameter.

Next I pinned and steamed them to get the swag shape (like they were pulled back with tiebacks).   It’s best to pin with the curtains and rings already on the rod.  That way it will hang nicely just as you want it to on the wall.  I placed a bamboo skewer through the rings and held it with pins.  My pin board was a wax paper covered ceiling tile board with graph paper under the wax paper.

This next step is a little tricky.  In general, you want to keep the outer few pleats on each panel straight (pin them) and re-shape only the inside pleats (inside = center where they would draw open).  I usually use the thin bug pins (especially with fine, thin fabric) but this time I just used glass head sewing pins.  Bug pins make smaller holes but are harder to work with since they bend so easily.  Method for shaping the swag:
Two hints to make these more scaled and realistic:
Hint #1 – Pinch them very tightly at the place where the swag is (middle).  Make it as small as possible there.
Hint #2 – don’t let the bottom sections fan out, try to keep each side of the panel parallel to each other.  Real drapes hang straight down from the gathered area. (though you can see in later photos mine did fan out a bit after a while because I hadn’t secured them yet).

After you steam them (yes, this is the second time now!) and let them dry, secure the pleats on the back either with lightweight white cardboard – cut to fit and glue to back, or iron on fusible interfacing.  I added tiebacks from velvet ribbon with silk roses glued on.  Even if this shows through to the other side of the window, the backing shouldn’t be too noticeable since it just looks like a white lining.

Here are the pieces in progress:
Rods are cut from bamboo skewers.  Sometimes you have to sand them a little because they have long splinters.  I cut them using my X-acto knife. (HINT: cut it at least ½ inch longer than you need to give yourself some room to fit into the brackets – you can trim off extra after it is painted).   I drilled a little hole in each end for the finial wire using a wire drill bit in a pin vise (tool for holding small drill bits while you drill).  It’s not as hard to drill into the cut end of the stick as you would think.
Finials – I used “fancy” head pins that you buy in the bead store.  They have a decorative end.  I just cut the pin down to about ¼ inch to fit in the drilled hole (wire cutters).  DON’T GLUE them into the rod until you are ready to hang as you will have to remove one of them to hang the drapes.

Brackets – I layered two tiny (about ½ inch long) pieces of flat wood trim, or scrap wood about 1/16 inch thick.  I glued a smaller piece on top of a larger one.  I drilled a hole with a finger drill, #64 for the screw eye (or eye pin).  (Finger drills can be purchased from Micro-Mark but you can also use the pin vise).  I screwed in a very small screw eye to hold the rod. 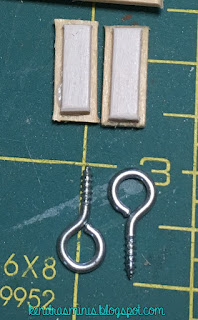 I painted the rod, finials and brackets and eye pin with a gold paint pen (Krylon) because I’m too lazy to clean out a brush.  But it’s convenient!

How to hang:  Dry fit rod and curtains and mark (blue tape works great) where the brackets will go.  Trim the rod shorter now if needed (you will also have to re-drill the hole).

See my other blogs on curtains, drapes or draperies (I used different keywords) if you need more detail.  I was a little brief in this post.  Now you have no excuse not to have curtains in every project! 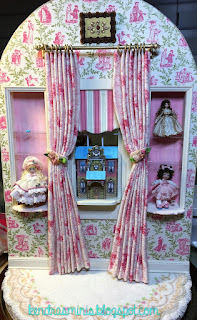 Here is a sneak preview of my next tutorial - coming soon: 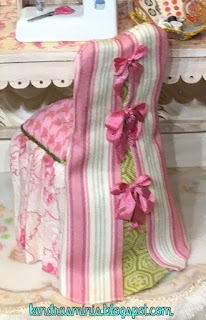