This blog is overdue.  In January I wanted to update my blog with some Christmas gifts I received and also some I made.  But, a grandbaby, miniature event and several other things have pushed this out so now I am getting it done (diorama ornaments follow below).

Christmas gifts from my sweet daughters:

My gifts to both of them were ornaments with scenes inside.  I was inspired by a friend who had shown me some she had made.  she had put cute quarter inch scale Christmas scenes inside a full size ornament:

So Charlotte inspired me to make some.   Here are the ones I made my girls.  They are not very traditional in colors but I made them to fit their tastes:
Chelsie's ornament has little dolls representing her (pregnant) self and her husband, Brad.  Also quarter inch scale cat and dog just like their own pets.  I reproduced her Christmas wreath and (loosely) the Christmas stockings Brad's mother made them.  The back of the ornament has a decoupaged scene cut from an old Christmas card.

Cara's ornament in one of her favorite colors (purple) depicts her doing her favorite thing - sitting with a fire and a blanket with one cat on her lap and the other at her feet.  She also loves nutcrackers so I included a tiny one by the fireplace. 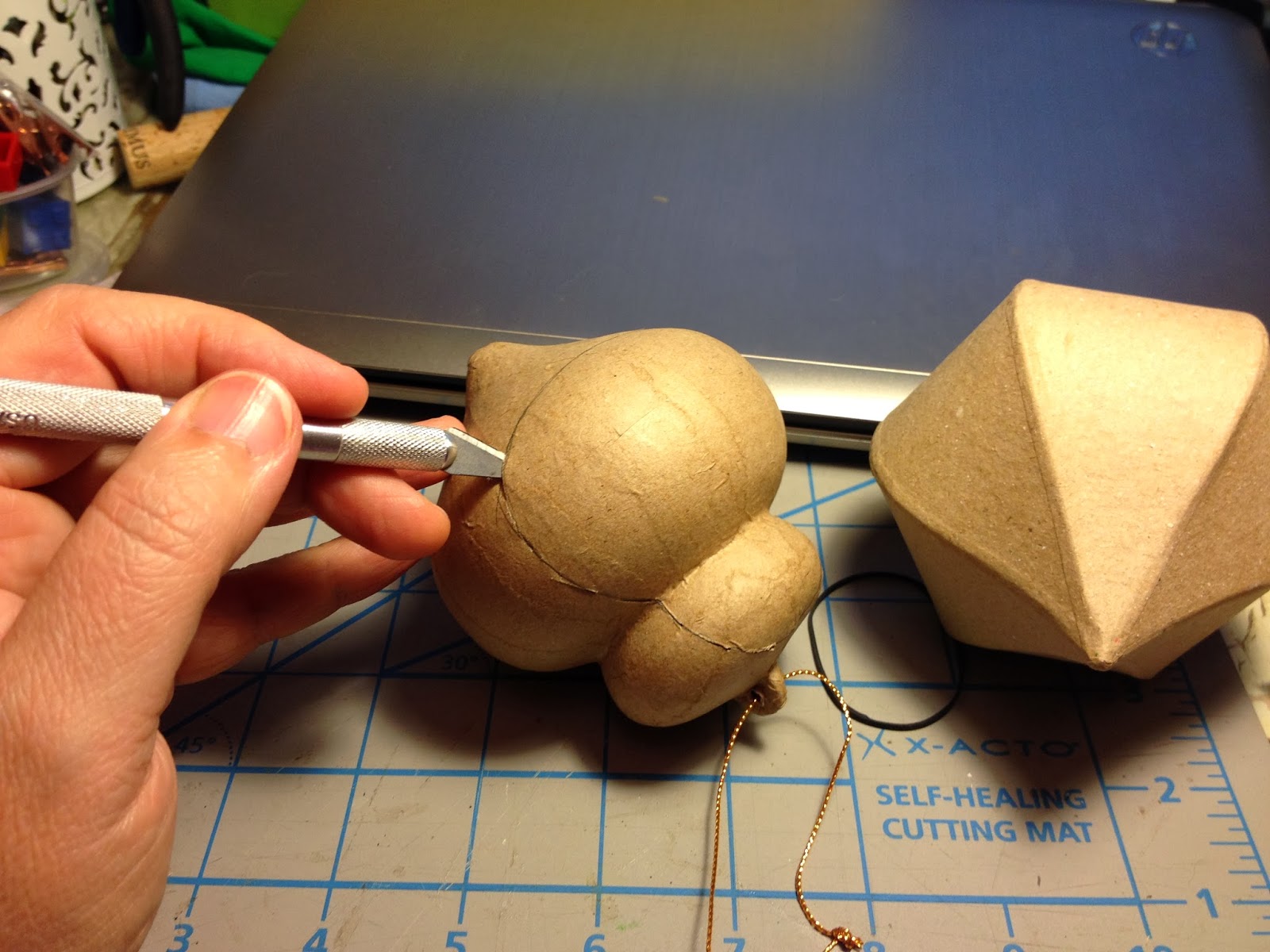 These ornaments were fun to make so I will just briefly tell how I decorated and filled them.  The papier mache ornaments were from Hobby Lobby.  I cut an opening in them.  The double round one was actually plastic underneath the paper mache so a little harder to cut. 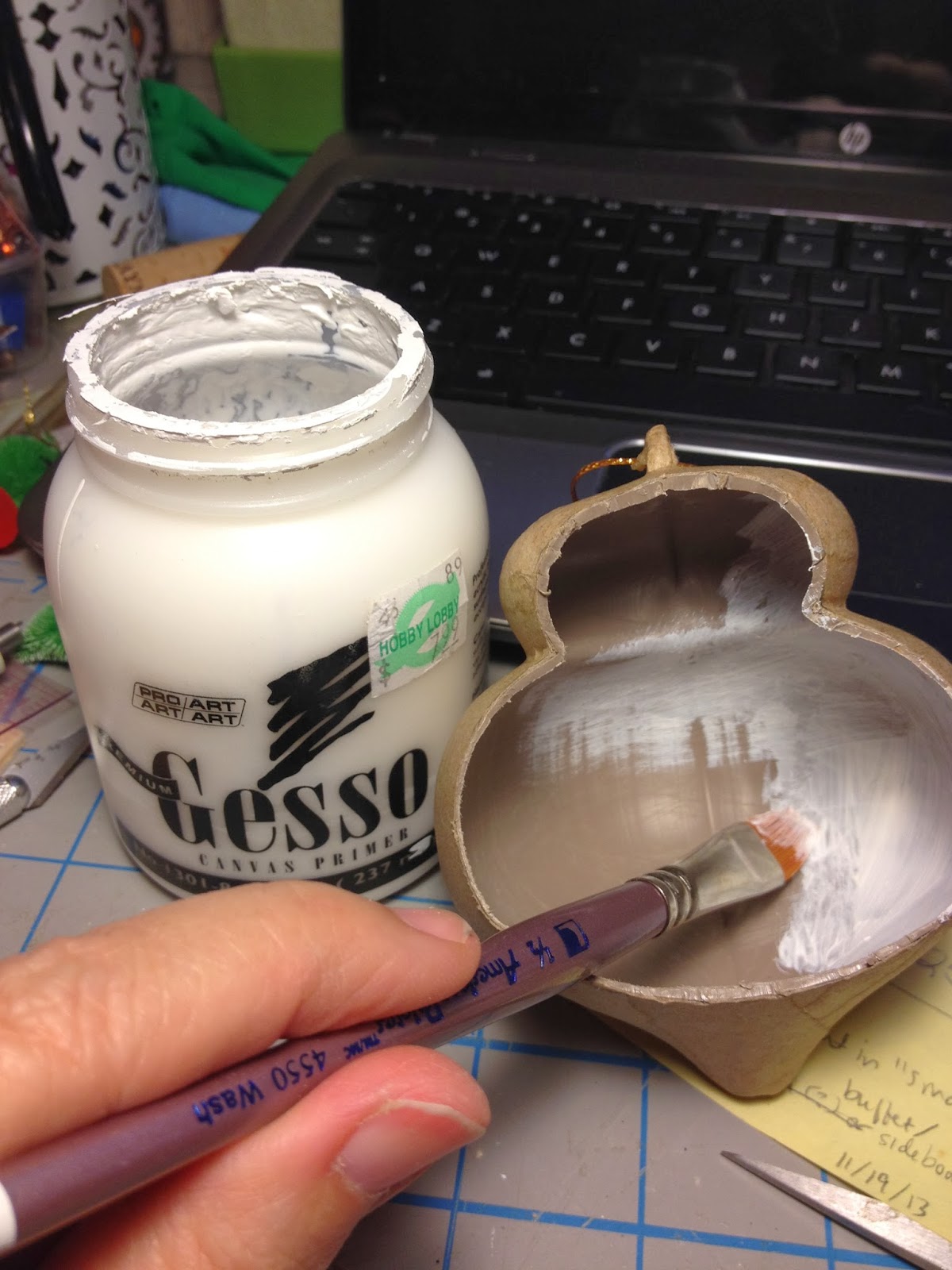 I painted the inside with Gesso then two colors of glitter.  I cut a piece of foam core to make a base for the furniture to sit on. 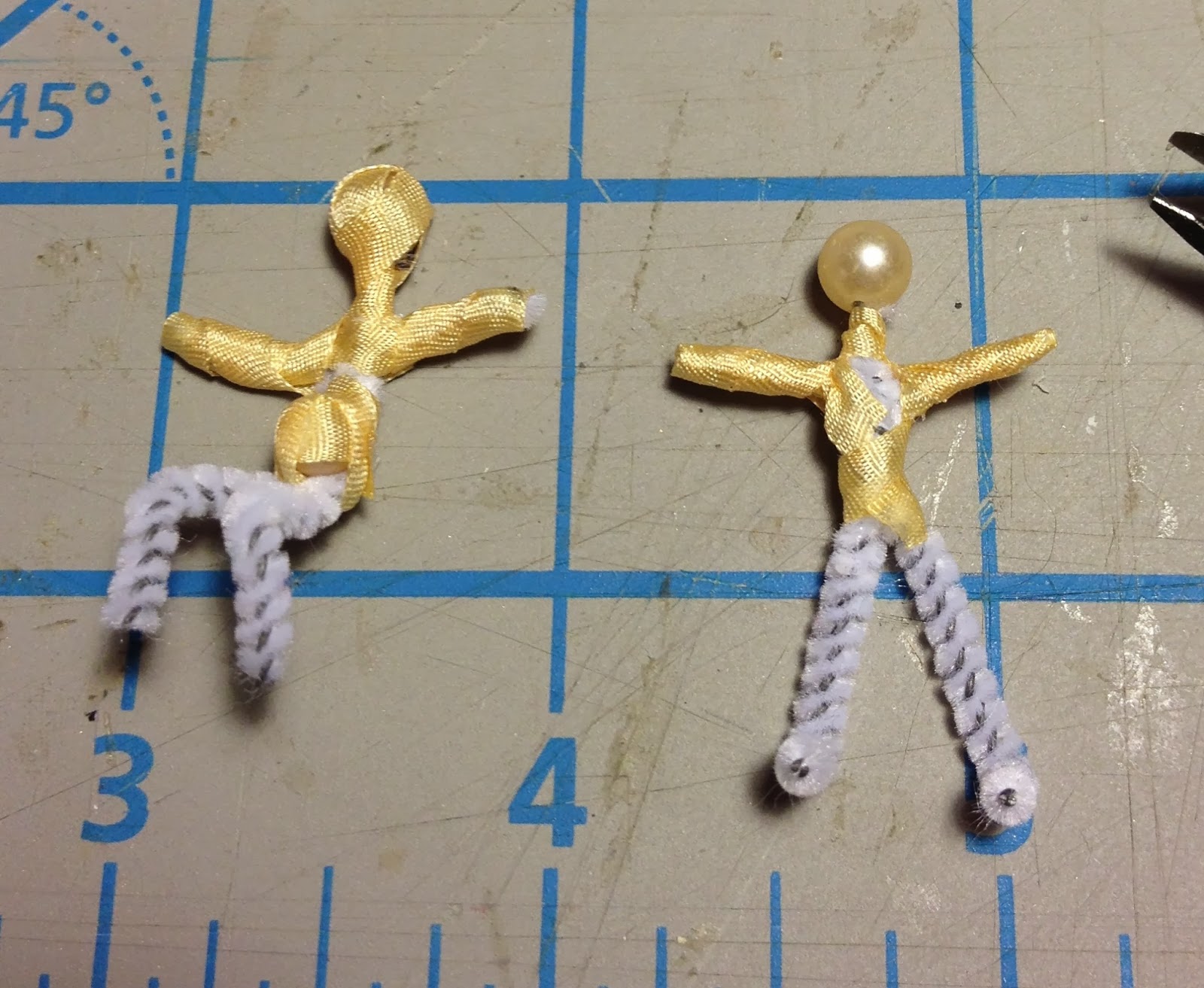 The little figures were just pipe cleaner wrapped with silk ribbon and painted.  I used a small bead for the pregnant belly. 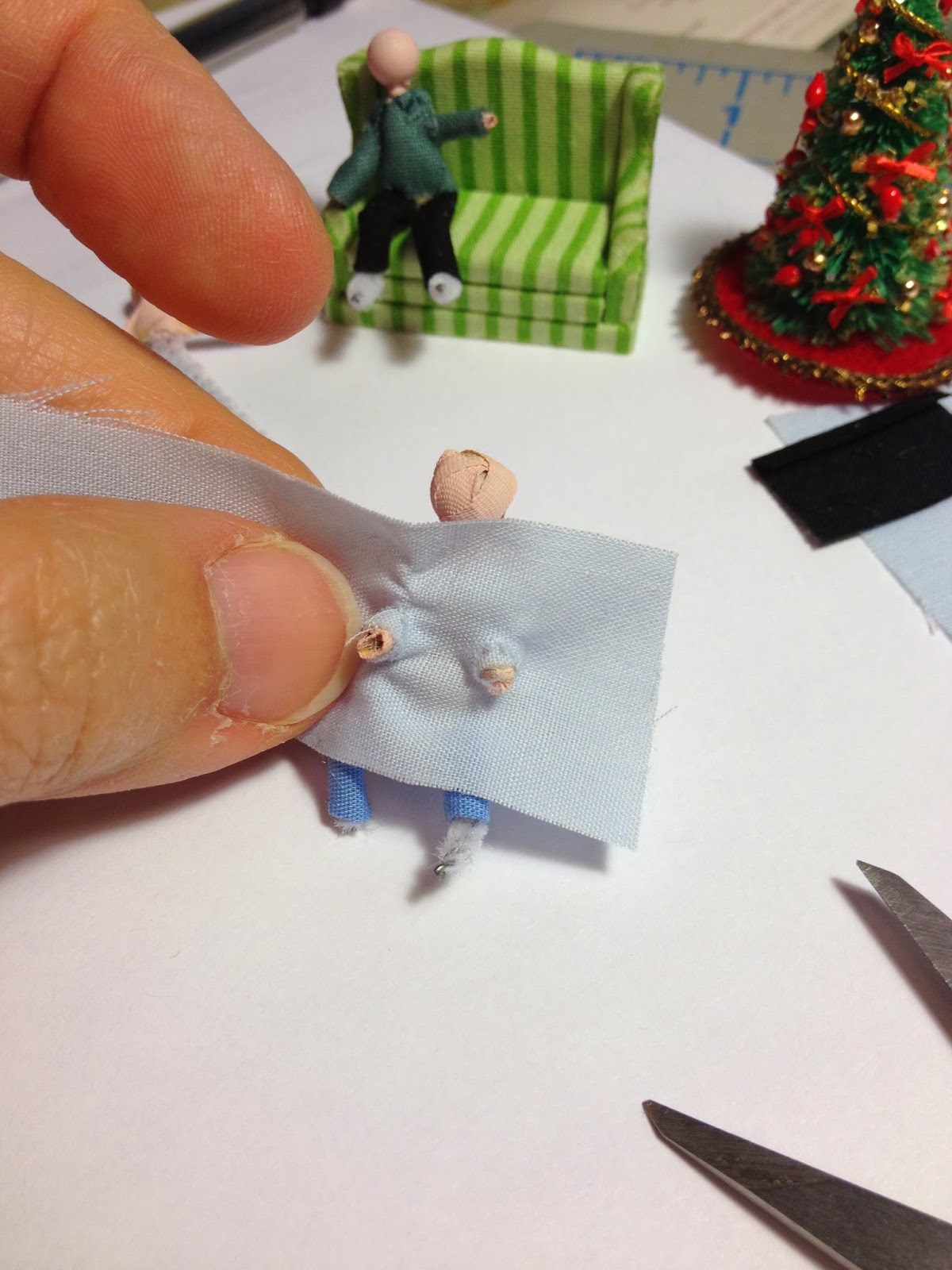 I used scraps of fabric to dress the 'dolls'.  Really just wrapped the arms and legs for sleeves and pants then cut tiny slits in another piece and worked it over the sleeves for the shirt.  Seams were glued down the back.

The sofa and chair were from a kit from Karen Benson 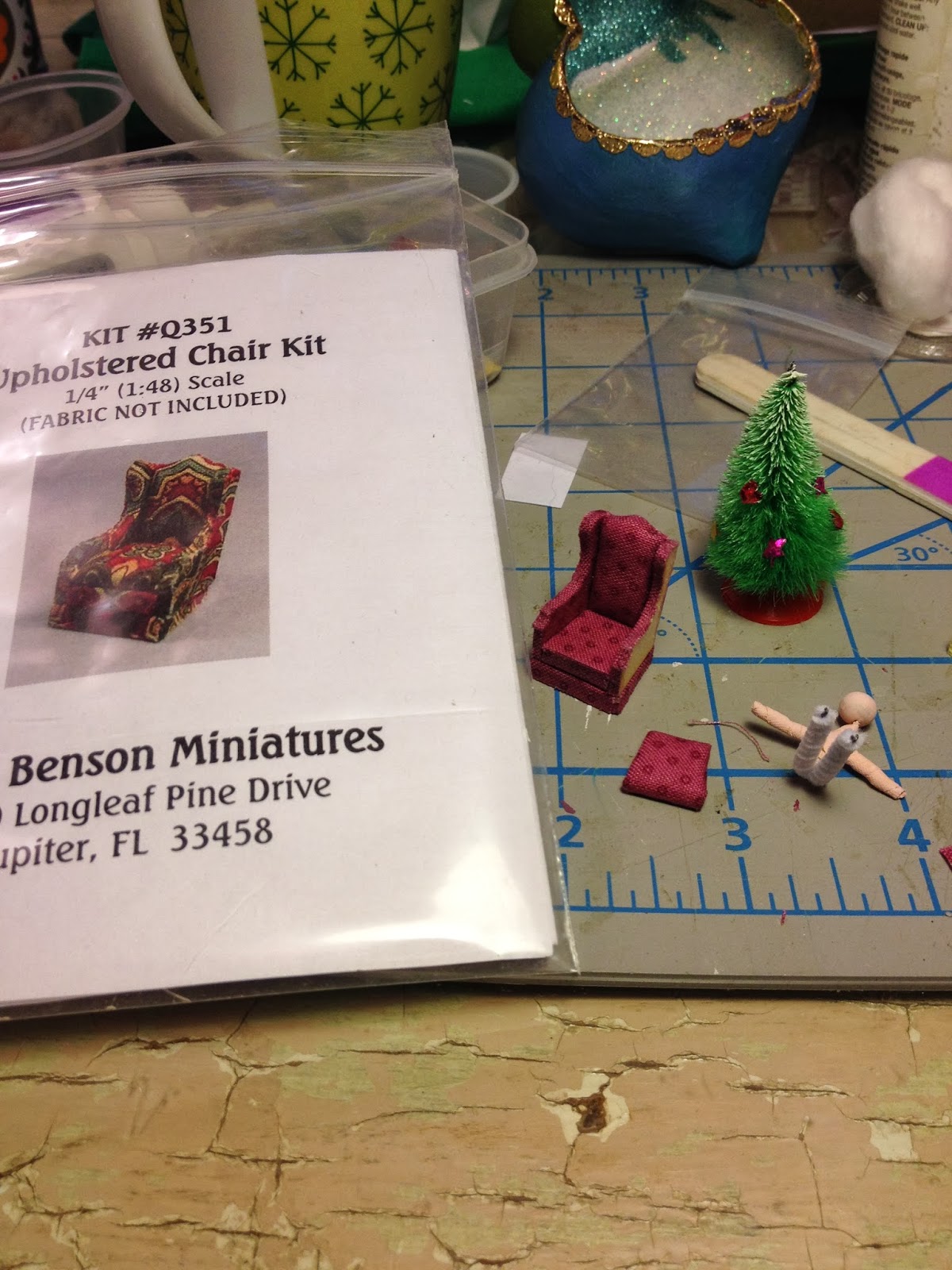 The little figures and chairs.  Quarter inch scale is not my specialty! 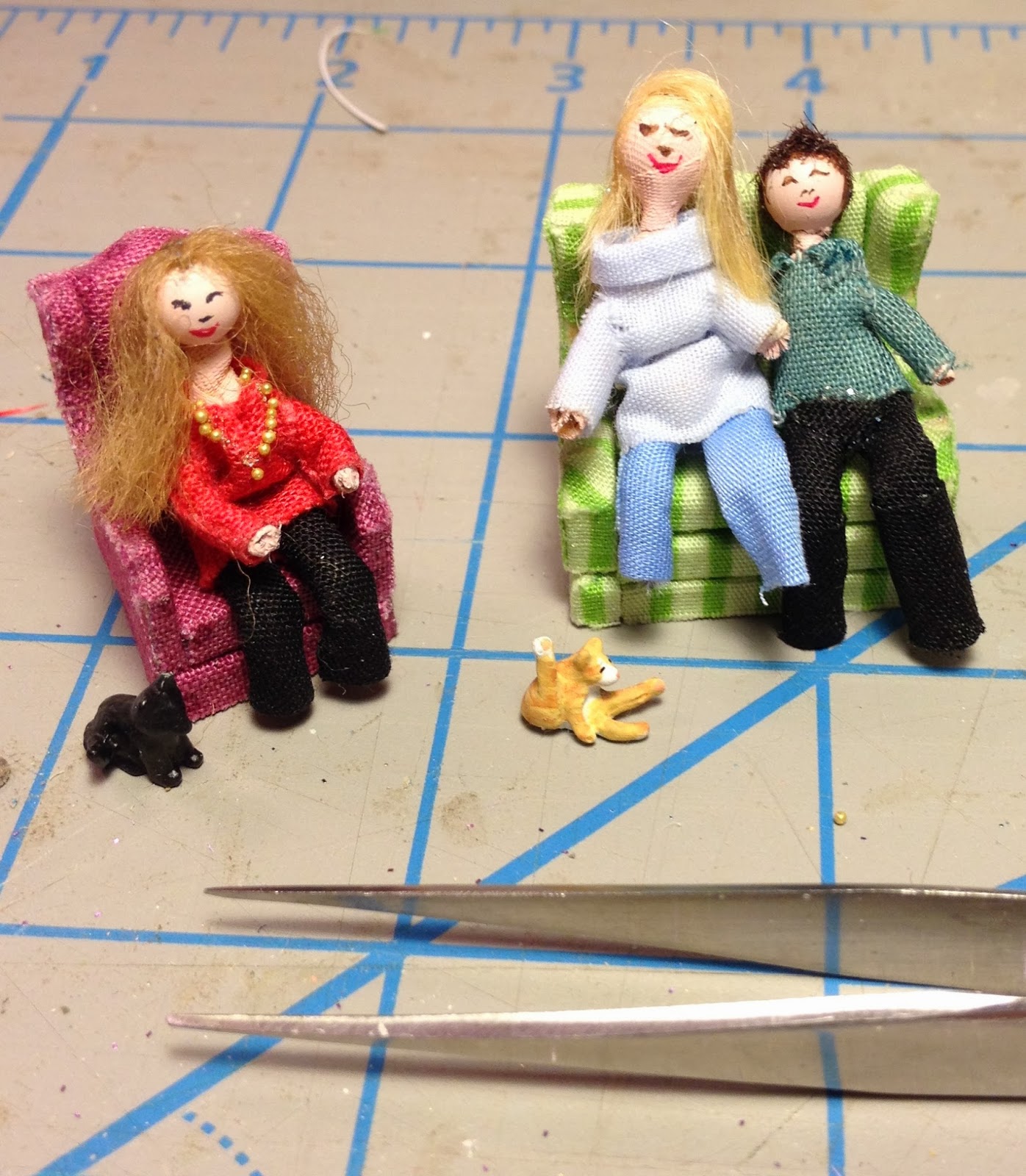 Here is a closer look at one of them. 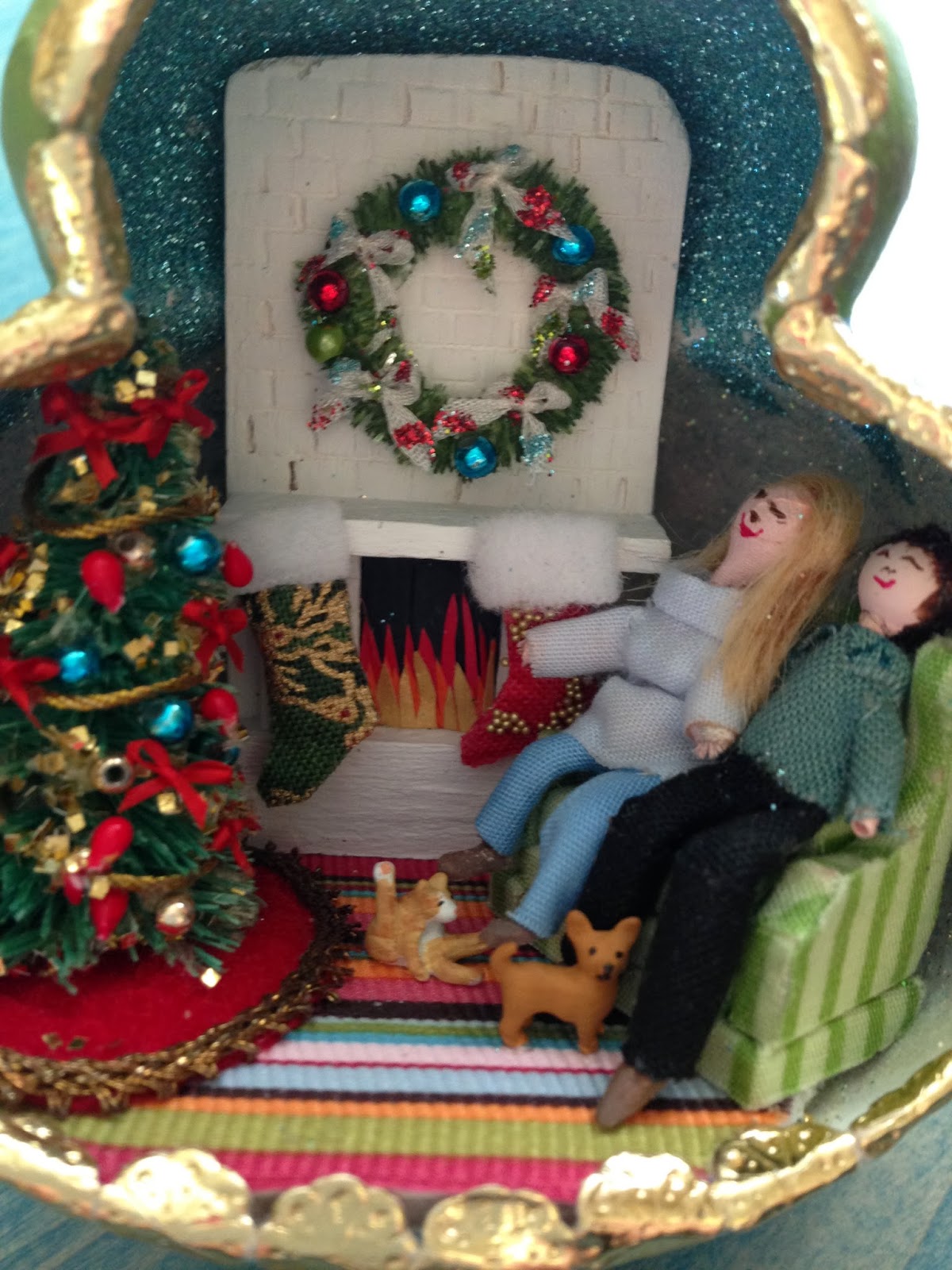 These were fun to make.  I really want to do some more next year.  Hope you are inspired to try some too!

I just recovered from another wonderful birthday party for a miniature organization I belong to.  Society of American Miniaturists (SAM) exists to further the hobby and expose new miniaturists to great events such as workshops, etc.  You can find their link in "Sites I Love" in the sidebar.  Every year they put on two events.  An all day theme workshop in February (free to members)  and a workshop weekend /convention type event in September.

Both are awesome but the birthday party is always a wonderful time.  This year SAM's birthday party was hosted by clubs from Corpus Christi, TX.  The theme was a Gardener's Retreat.  In addition to a sit-down take home project (garden shed, potting bench, bench seat, shelf, landscaping, stepping stones, etc. etc) we are also treated to raffle items, exhibits and TOTE BAGS!  Yes, a bag full of garden related goodies was handed out.  See photos below of this wonderful event.


Above is the shed structure.  The walls are strips of actual barn board shaved to about 1/8" thick.  We didn't even have to age it!.  We learned to landscape the base, make awesome stepping stones (from broken hardie board!  Genius!), age the floor (Susan's floor above is checkered).  We also learned to rust the corrugated roof with paint and we made a skylight window for the roof. 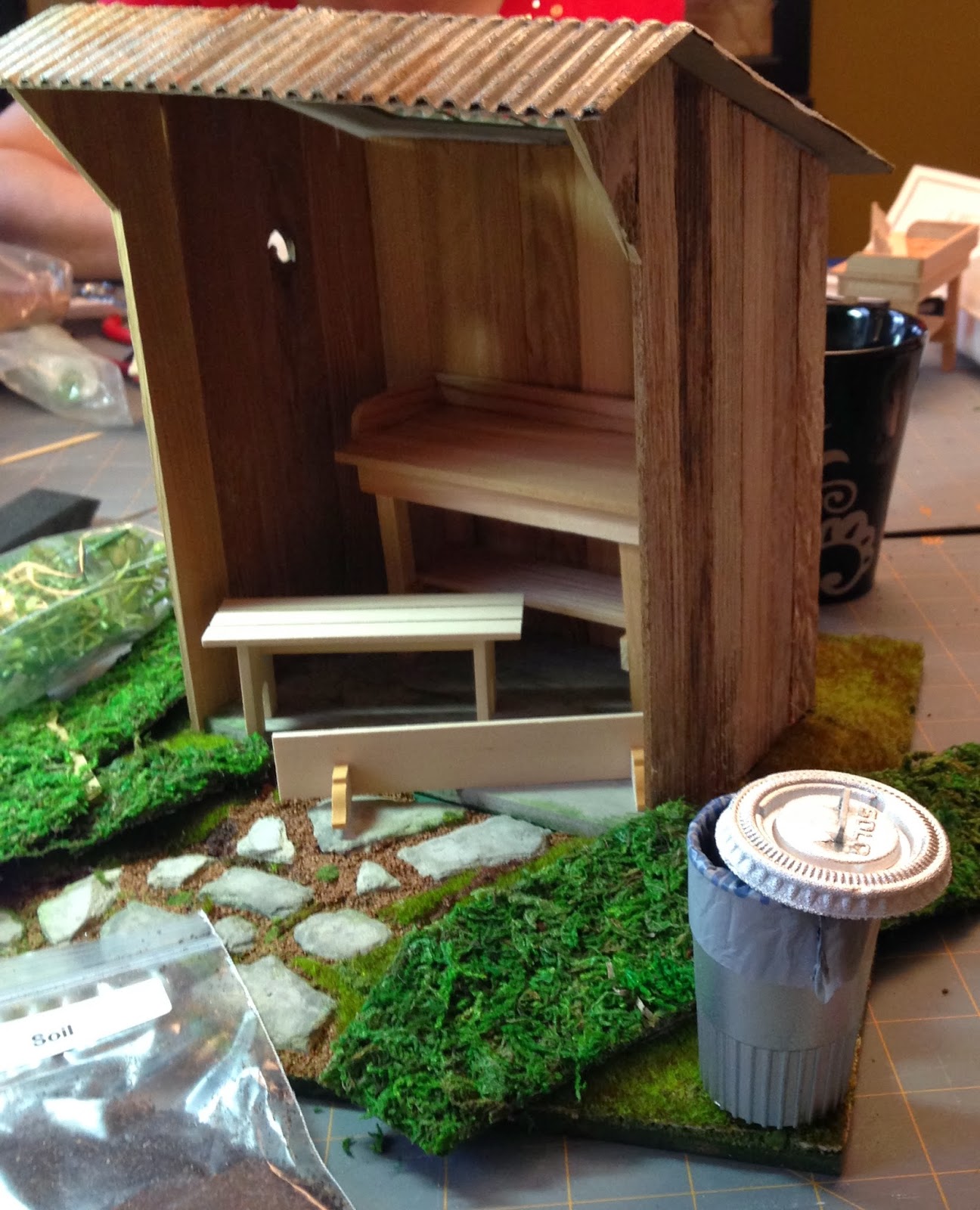 Above you can see more of the projects completed during the day long workshop.  Potting table, small slatted bench, a shelf with brackets.  You can also see the outer barn board up close.  The trash can with its own liner was also given to us in the class.


Above you can see all the tote bag items arranged inside the shed (without the roof).


Thanks so much to the Corpus Christi clubs and the committee, headed up by Terri Young (also SAM newsletter editor) for another wonderful SAM Birthday Party.
Posted by Mininut at 3:40 PM No comments: